Mornhavon and his armies were defeated—but not before their general had resorted to desperate, dark magic that rendered his twisted spirit immortal. But Karigan is no ordinary Rider, for she can traverse the barriers of time and space. Because of this extraordinary ability, she was able to transport the spirit of Mornhavon into the future, buying precious time for her country. Though Mornhavon is gone, the forest is still a treacherous and unnatural place filled with monstrous creatures and deadly traps. Plus, no one knows how far in the future Mornhavon has been sent—Ten years?

With the ghostly help of the First Rider, Karigan had managed to drive off the spirit of Mornhavon—but for how long, no one could know. And now, the descendants of those Arcosians are ready to strike, reaching out to claim the land their forebears had tried to conquer. Worse, these vengeful enemies had spent generations honing their powers of dark magic—a force against which the Sacoridians had no defense…. Eventually, Mornhavon was captured, and his evil spirit imprisoned in Blackveil Forest.


The spirit of Mornhavon, sensing the weakness, began to wake, seeking vengeance, and causing frightening aberrations throughout the land. Karigan managed to transport the spirit of Mornhavon into the future, buying valuable time for her king and country. But how far in the future is Mornhavon now? A hundred years? Only one year? There is no way to tell. For there were Arcosian soldiers who survived the Long War, and the descendants of those ancient enemies spent generations honing their powers of dark magic—a force against which the Sacoridians have no defense….

Exhausted in body and spirit, and determined to take control of her own destiny, Karigan returned to her home in Corsa.

Ghostly hoofbeats echo in the deep regions of her mind. When she awakes to find herself on horseback, halfway to Sacor City in her nightgown, she finally gives in. Karigan returns to the court, only to find the Green Riders weakened and diminished. Rider magic has become unreliable, and she herself has ghostly visions of Lil Ambriodhe, First Rider, and founder of the Green Rider corps.

But why is the First Rider appearing to Karigan? And will Karigan be able to seek the help of a woman who has been dead for a thousand years? Green Rider. With his dying breath, he tells her he is a Green Rider, one of the magical messengers of the King. As she trudges through the immense Green Cloak forest, her thoughts are interrupted by the clattering of hooves, as a galloping horse bursts from the woods.

As the young man lies dying on the road, he tells Karigan he is a Green Rider, one of the legendary messengers of the king of Sacoridia. Taking on the golden-winged horse brooch that is the symbol of the Green Riders, Karigan is swept into a world of deadly danger and complex magic, her life forever changed. Compelled by forces she cannot understand, Karigan is accompanied by the silent specter of the fallen messenger and hounded by dark beings bent on seeing that the message, and its reluctant carrier, never reach their destination.

It mostly comes across as preachy against technology. And the leap forward hundred years is silly — at least when you try to think of the mechanisms.

Sure time travel has cropped up in the previous tales, but in small bursts and largely into the past far more acceptable. The future world lacks the feel of the original setting. It comes across as flat, underdeveloped and largely uninteresting. Granted, the villains in the stories do tend towards the Evil variety.

It is one of the drawbacks of the writing. Evil villains with a capital E are really bland.

It was one of the strengths of the earlier books. While Evil existed in the world, each story centred around a much more approachable villain — a force with clearly defined motivation. The huge surprise that the Emperor in the future is not the Evil Mornhavon the Black was so clearly set up from the beginning as to be unsurprising. It is not entirely a bad thing; at least this was set up in advance. I heard Mirror Sight was supposed to be a stand-alone story in the series.

Not dependant on the previous books. Again, I have not finished the story, but thus far I would not recommend it to anyone not already indoctrinated. This book suffers from weak writing and some silly characters. Yup I am bored with these immortal, perfect, beautiful, arrogant, tree-hugging non-humans. They are tiresome in the extreme. Their use is lazy and their character traits are all derivatives of Elves. There is nothing particularly new in these magical beings that are superior to humans in every obvious quality.

The weak writing surfaces most in the telling and not showing. There is far too much info dumping in these first pages. 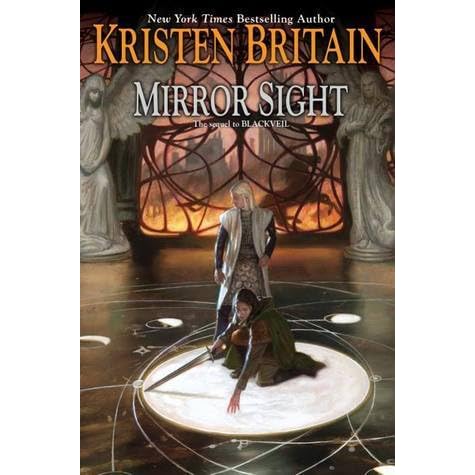 Everything is description and explanation. If there is something that has to be retold then find an interesting way of doing so.

At the very least make sure her perspective is biased. But the fact of the matter is I have read all the previous books. If I wanted to know more about them, I would pull them from my shelf to reread. Again it should be done in a new and refreshing way. It can be done obliquely so those familiar with the early part of the series are able to make the connection and those new just skim over that part as unimportant. Which brings me to one of the interesting connections I had the pleasure of making.

This group skulks in the shadows and plots against the good guys.

Well, fast forward to book five where our heroine finds herself on the other side of things. Now she is part of the group wanting to over through their emperor and hiding in the shadows. I rather like the symmetry of the situation. Only of course, in this case everything is so decidedly black-and-white we know the emperor is Evil and has to be overthrown.